The other day, I was listening to a podcast about Leonardo Da Vinci.

He was a productive fella.

His accomplishments across different fields including art, science, maths and geography have earned him a reputation as the ultimate renaissance multitasker.

Which is interesting because he didn’t multitask.

Da Vinci had something in common with other ultra-achievers like Steve Jobs and Mark Zuckerberg – a method you can use when learning a language, that just might help you:

How much stuff are you trying to do at the moment?

Maybe you’d like to speak a language (or two), change jobs, read more books, learn how to cook, improve your fitness, learn to meditate, start a blog, learn to play a musical instrument…

Whatever goals you have, you probably like the idea of being able to do them sooner rather than later, so it’s tempting to start a few at the same time.

That’s the way most people, present company included, approach the things we’d like to do in life. It’s also the reason most people’s goals end up drifting on a to-do list that never gets done.

Really successful people do it differently

Da Vinci believed that trying to do lots of things at once is counterproductive. He said: 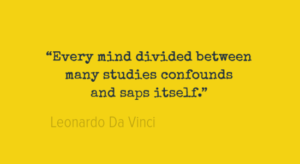 This might sound surprising coming from the renaissance man who had his finger in so many pies.

But when we think of Leonardo as a multi-tasker, we’re missing one important detail: although he achieved an insane amount of stuff in his lifetime, he didn’t do it all at the same time. According to biographer Sherwin Nuland, Da Vinci’s approach was characterised by an “ability to focus all of his intensity on the job immediately in front of him”

And he’s in good company. Bill Gates and Warren Buffett both single out their ability to focus on one thing relentlessly as the most important factor in their success.

Steve Jobs challenged the idea that focus is about saying yes to the thing you want to focus on. In his eyes, deciding what not to do is just as important.

If you want to speak a language well, saying no to your other goals (for a little while) could be just as important as working on the language you want to learn.

It just means that you’ll be more successful if you tackle these things one at a time.

In the rest of this post, you’ll learn how to avoid the silly mistake I made that led me to the “one thing” philosophy, and science-backed reasons why it pays to go after your goals sequentially, not simultaneously.

At the end, I’ll talk about how I’m applying the “one thing” idea to my own language learning.

How not to learn a language

Focusing on one thing at a time is something I’ve never been very good at.

Case in point: over the last 10 months, I’ve been trying to learn 5 languages on top of a fairly busy schedule.

I was just about holding it together until I took on one more project at work. It was like clumsily throwing the last block on an already shaky jenga tower, and everything came crashing down.

I got ill, which may or may not have been stress related, and my brain melted.

So I did what any rational person would have done in my situation: I gave up on my language learning goals, assumed a starfish position on the sofa, ate ice-cream and watched all 3 seasons of Better Call Saul dubbed in French (just in case you were wondering, it sounds pretty silly in French).

The July heat in Milan didn’t help – my brain tends to go on standby over 30 degrees – but this mini breakdown had been brewing for a while.

I’ve always had a bad case of shiny object syndrome.

I get enthusiastic about starting something new, then as the novelty starts to wear off, something else catches my eye: I start learning new languages before I’m happy with my level in the ones I’m already learning, or take on new projects at work without thinking about the time and energy it will take away from the things I’m already doing.

The result: I’m constantly busy but I don’t get much done. I get all the stress that comes with a hectic schedule, without the satisfaction of ticking things off my to do list. If you’re someone who likes starting new projects, this might sound familiar.

For the most part, having the impetus to start new things is good. It leads you on fun adventures and means you’ve got a lot of get-up-and-go – a valuable quality that not everyone has.

But if you don’t learn how to rein it in, it will keep you stuck on a hamster wheel – expending a ton of energy and getting nowhere.

How you feel about all this depends on your aim: if you like trying new things for the fun of it, or you want to learn bits and pieces in a few different languages, then go forth and dabble my friend.

But if your end goal is to speak a language well and you’d like to do it sooner rather than later, you’ll be less stressed and achieve more if you make that your sole focus for a while.

If you try chasing a few goals at the same time, it’s difficult to find enough hours in the day to do any of them well.

Alternatively, if you make learning a language your only goal, you can give it everything you’ve got: your time, energy and willpower.

Needless to say, this will give you much better results compared to when learning a language is just another thing on your to do list you only get around to sporadically.

2. You’ll increase your chances of learning a language

Motivational psychologists have known for a while that you can dramatically increase your chances of reaching your goal by deciding when and where you’ll do it.

For example: “I’ll study Italian for 30 minutes during my commute” or “I’ll go to the gym before work on Monday, Wednesday and Friday”.

However, research shows that this tactic only works with one goal. As soon as you try to add more, you’re less likely to achieve any of them.

Imagine you have two goals, like learning French and German. Let’s say it takes 1 year to learn each language to the point where you can speak it well. You have two choices:

Humans are bad at delayed gratification. The longer you delay the results, the harder it is to stay motivated.

In the best case scenario, going after two goals simultaneously will take twice as long. In reality, it may take longer because you won’t benefit from the intense focus and extra motivation you get from choosing one goal at a time.

Do you feel anxious when there’s lots of things on your to-do list that you never get around to?

There’s a reason for that.

Things that are still in process tend to stay in our minds more than things that are finished – think waiters who have brilliant memories of what people ordered while they’re still at the table, but forget as soon as they’ve paid the bill and walked out the door.

Zeigarnik, the psychologist who identified this effect, hypothesised that unfinished tasks create a kind of mental discomfort which causes us to keep thinking about the job until it’s reached its logical conclusion.

An example of this effect is the cliffhanger: when a TV episode finishes in the middle of something important, it creates a weird kind of tension that makes you want to keep watching.

This tendency to ruminate over unfinished business explains why unmet goals keep popping up and causing you stress.

If you’re working towards one manageable goal, the Zeigarnik effect works in your favour: it spurs you to take action until you reach the finish line.

But if you’ve got several goals on the go and you’re not making much progress, all that unfinished business will keep coming back to haunt you, causing a lot of unnecessary stress and worry.

What about all the other stuff I want to do?

You can still do other productive things while working towards your goal of learning a language, like going to the gym, cooking or meditating.

The key is to have one goal that you actively pursue at a time.

By all means go to the gym, meditate, cook some tasty recipes. Just don’t give yourself any hardcore goals in these areas, like running a marathon, meditating for 30 minutes a day, or starting a cookery class.

If you want to take advantage of extreme focus to help you learn a language faster, just choose one language and give it your all, until you’re satisfied with your level. Once you’re done, you can move onto the next thing on your bucket list.

My “one thing” for August is to improve my French. I’m aiming to reach advanced level by the end of November, when I’m going to take an exam to certify my level (it’s nice to have something concrete to aim for, otherwise “advanced” can get a bit wishy washy).

To reach it, I’m working on blocking out other distractions and clearing up around 3 hours a day (apart from weekends!) to focus exclusively on French. Here’s my plan for August:

I don’t have online lessons with my conversation tutor this month because I’m going to France for 3 whole weeks! I’m hoping I’ll get lots of opportunities to practise while I’m there. But I may end up booking a few classes if this doesn’t turn out as planned.

For a more detailed breakdown of my French study routine, you can check out last month’s post: how I’m becoming fluent in French from my living room.

What about the other languages?

Before I decided to experiment with laser focus, I scrambled my way to intermediate level in 3 other languages – Spanish, German and Chinese. The next question is, how can I maintain my level in these languages without setting goals?

My plan is to do things that don’t feel like work in these languages, including: watching cheesy soap operas/reality TV shows, reading Harry Potter and chatting to conversation tutors on Skype.

Is it better to focus on just one language at a time, or do you have a different take on things? Looking forward to hearing your thoughts!

This post was part of #clearthelist, hosted by Lindsay Williams, Kris Broholm, and Angel Pretot, who share their monthly language goals and encourage you to do the same. Head over to Lindsay does languages for more info on how to take part.

Katie is a teacher, blogger and all round language nerd. Based in Milan, Italy, when she’s not huddled behind her desk writing or learning languages, you’ll probably find her sitting out on the terrace with a beer in one hand and a slice of pizza in the other.

What's the last book you read in a foreign languag

Why do you want to learn a foreign language?‌⁠

⁠ How do you stick with your language in the beg

We use cookies to ensure that we give you the best experience on our website. If you continue to use this site we will assume that you are happy with it.OkPrivacy policy